The New Path up to Wigmore Castle is completed.

Anyone who has walked the footpath up to Wigmore Castle this year will remember how muddy and overgrown the track had become. Now, thanks to the help and hard work from many groups the path has been totally transformed. Just look at the before and after pictures. 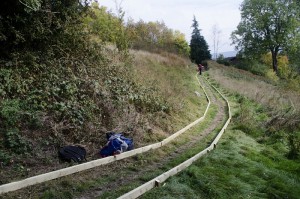 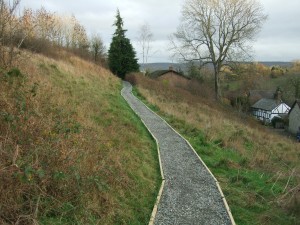 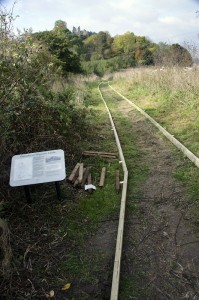 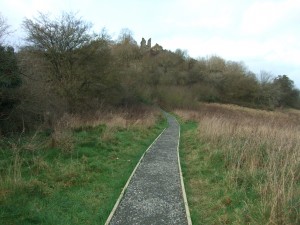 The aggregate was supplied in three lorry loads from Breedon Aggregates (Leinthall Earls Quarry).  About 40 tons was supplied and both the aggregate and the haulage were free of charge by way of a donation to the village. The timber revetments, pegs and membrane were supplied and delivered by Kington Building Supplies, and a mechanical track dumper was hired and delivered from Arrow Plant & Tool Hire in Leominster.

Finally but not least the path was laid by Herefordshire Ramblers who initially strimmed along the route before laying the materials.  The Ramblers consisted of about five men on average and supervised by John Wride.

David Gardiner, our Footpaths Officer, oversaw the logistics of the work and he liaised with John in the ordering and delivery of all the materials including the hiring of the truck. English Heritage gave a grant of £1000 and Wigmore Group Parish Council gave £800. The Ramblers donated their time and muscle power to the project. Walkers have already commented favourably on the upgraded path.